It all started as a wild idea. When placing a field phone somewhere outdoor, why not have a style matching phone box around it?

In preparation for GPN16 this looked like a good idea and we made some plans too material with us to build something that could be called a "phone box". Things turned out to be different at the event and part of the material was used to build something different. Out came something that looked more like an umbrella. It still looked "cool" or at least unique and served its purpose of protecting the phone placed beneath it.

To at least get a prove, that the original concept would have worked, the set up was tested at the "Fieldday" 2016 of the local amateur radio club in Regensburg. It did work - but took a _lot_ of time to set up. The roof evolved a little bit further, but the rest was pretty close to the original plan. 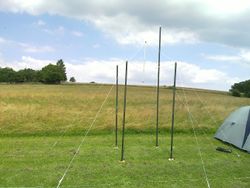 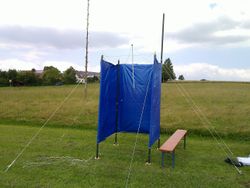 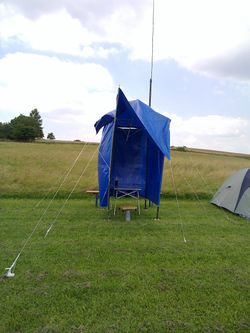 Turns out, this is far to much effort to be practical. If we want to do something like that in the future, it has to be easy to set up and not eat up a lot of time. There are some designs of pavilion tents, that might be adapted to be a solution here.